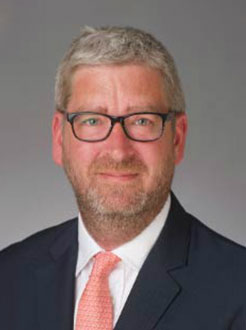 Nick M. Child is a Managing Director at Secretariat based in London. Mr. Child has played an active role in the global disputes industry for over 29 years. He heads up firm-wide business development and helps deliver the Secretariat brand around the world. With his detailed knowledge and understanding of the market and our specialized practice areas, Mr. Child puts the needs and expectations of our clients first.

Prior to joining Secretariat, Mr. Child spent over 21 years at Keating Chambers in London, where he was appointed Senior Clerk by Sir Vivian Ramsey in 2005. His key role at Keating incorporated all aspects of Chambers’ practice management, client care and global business development. Mr. Child transferred his skills to the consultancy world in 2013 when recruited into a global construction disputes practice at a publicly traded consultancy. He was the first Senior Clerk to ever make such a move.

Mr. Child is also co-founder of Law Rocks! along with our own Ted Scott, which is a global charity which hosts fundraising events across the globe raising much needed funds for those less fortunate than ourselves. He is an Ambassador to U.K. children’s charity KidsOut, founded by Mr. Child’s late father. Through their life-changing work, KidsOut gives disadvantaged children positive experiences to support them becoming future members of our society and workforce. He is also a founding Trustee of the Jane Lemon Foundation whose aims include the advancement of education of young lawyers including financial assistance to those who might not otherwise qualify for it, and to provide support to charities that provide counselling and support for the under 18s.

In 2011, Mr. Child was inducted into The Lawyer magazine’s ‘Hot 100’, a publication listing the 100 most influential people in the legal industry who said of him “Child goes to 11….”.